It was daybreak in the sleepy little town of Santa Rosa. The town was slowly transforming from a collection of small adobe huts and hovels to more permanant structures as Santa Rosa looked to the future. There was a sense of peace as Sheriff McNaughton and his deputies began their morning rounds. As the deputies greeted a few of the locals and proprieters there were a few anxious whispers of the notorious Sneaky Pete and his gang. 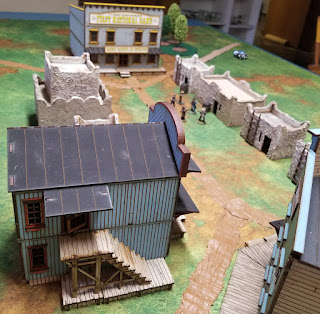 Sneaky Pete and his gang of thugs had indeed arrived in the town late in the night. They were staying at the bar and bunkhouse at the east end of town. The new bank at the west end of town was a target for Sneaky Pete's lustful greed. As daylight broke over the town, he sent his men out on both sides of the town to get into position to assault the bank and rob its vault. 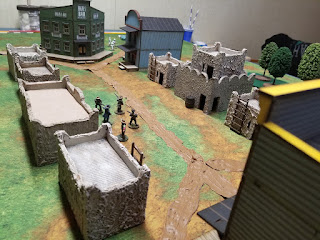 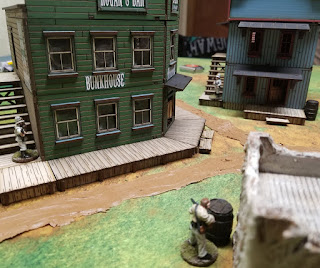 Because of the rumors around the town, the deputies had a heightened awareness and noticed the strangers skulking down the back alleys of Santa Rosa. A deputy bellowed a challenge as Sneaky Pete tried to get behind him. Shots would soon ring out breaking the stillness and quiet of early morning. 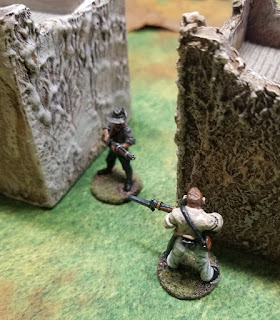 As the shots rang out, the sheriff was shot right through his badge and died immediately. Revenge was swift as the cowering thug was shot through the head by a deputy. 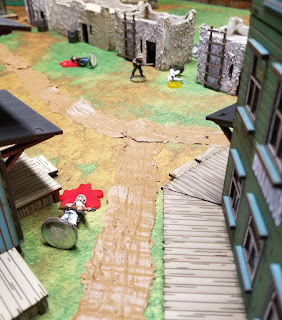 A blood alley developed, as usual, close to the jail house. 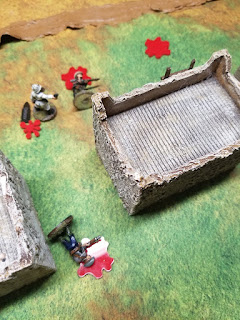 With all the distraction going on, Sneaky Pete does what he does best and stealthily moves to the back of the bank building. Maybe that back door will not be guarded. 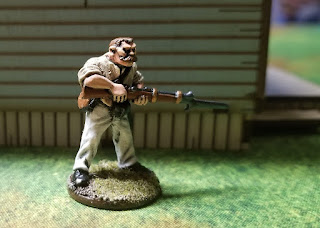 As the remaining deputies and thugs moved to action in the bank, one deputy eliminates a thug while suffering a wound. 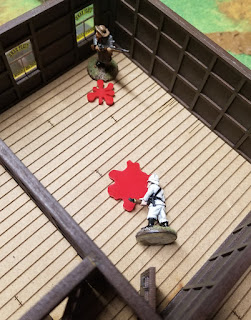 In the final moments Sneaky Pete and a deputy have a point blank gun duel through the vaults outer door. Although Sneaky Pete was wounded twice, his final shot killed the deputy in the vault and he was able to escape with the loot. 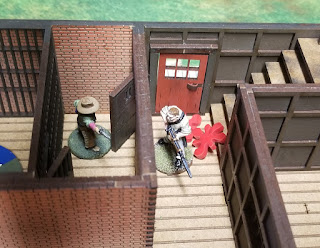 John and I played this scenario twice yesterday. He played Sneaky Pete in the first game, I played him in the second. Both games were won by the bad guys. For the rumors we used an odd/even die roll on whether the sheriff's men were aware that Pete's gang was in town. Also we assumed that the deputies struggled to lock the vault doors because of the unfamiliar keys. A roll of 5 or better locked the door. In the image above, the deputy missed the locking roll and had to face Sneaky Pete with the door ajar.

I am slowly replacing my adobe buildings that I made years ago with models from 4Ground. The bank model is highly detailed and took me several days work to finish. I do like the results. 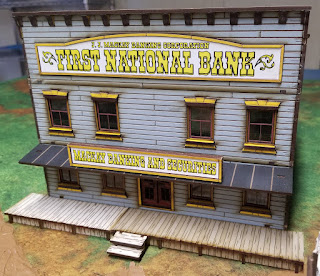 Happy gaming!
Posted by Essjam at 9:39 AM